Click here for Lou Rawls, You'll Never Find
then click back on this blog tab or here to listen as you browse, or not?

The Honky-Tonk Nun of Ethiopia 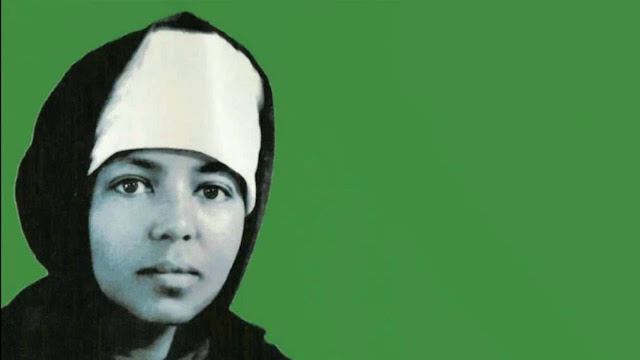 Emahoy Tsegué-Maryam Guèbrou—soon to celebrate her 98th birthday—has operated beyond all labels. Yet every once in a while, an artist emerges who poses a challenge to the system. They don’t fit easily into any bucket. Sometimes they seem to demand a category of their own.

There is no genre for funky Ethiopian nuns. They don’t fit into any radio format. There’s no club in your town where you can hear them perform.  She is in a class by herself. That sounds like what every artist wants, but it’s a scary place to make a career in the music world. 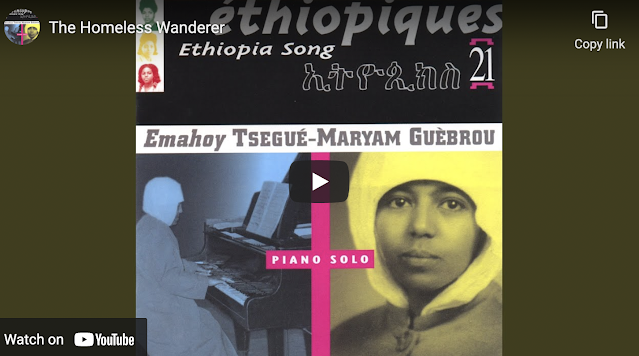 So it's hardly surprising that Guèbrou has had no career, at least no music career in any conventional sense of the term. She does have a vocation, however—that’s the exact word they use in the religious life. She lives in a tiny room at a hilltop monastery, with a piano nearby and religious icons that she painted herself. She rarely gives interviews and few have ever seen her perform her music. Yet she’s known, to a small clique of devoted fans, all over the world. 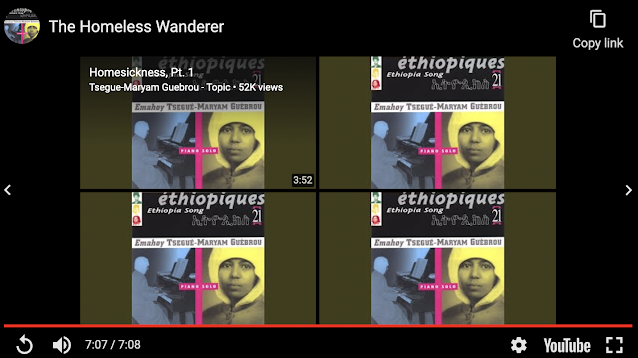 Most of her reputation rests on a compilation album released by the Éthiopiques label, run by Paris-based Buda Musique. This imprint specializes in Ethiopian music of the 1960s and 1970s, especially the spirited Ethio-Jazz that came out of Addis Ababa during that era. But Guèbrou’s solo piano music is something quite different—not for dancing or clubbing or partying.

But what exactly is it? There are snippets that sound like Chopin or Debussy or Bartok, but then there are bits that come straight out of the earliest Mississippi Delta or Texas blues tradition. Maybe it’s folk music—but I’m not sure which folks could claim ownership to this. I’m even more tempted to call this gospel or spiritual music—and it’s clear that Guèbrou sees this work as part of her religious calling. But I wouldn’t be surprised if others classified it as New Age or World Music, although those genre categories didn’t exist back when her main body of work was recorded.

Perhaps the biggest surprise is that Guèbrou had conventional music training, far more European than Ethiopian in its precepts. Raised by an affluent family in Addis Ababa, she was sent as a young girl to a boarding school in Switzerland, where she studied violin and piano. Later she undertook a more intense education under the guidance of Polish violinist Alexander Kontorowicz, practicing up to nine hours per day, according to her account. At age 23, Guèbrou won a scholarship to the Royal Academy of Music in London, but turned it down. 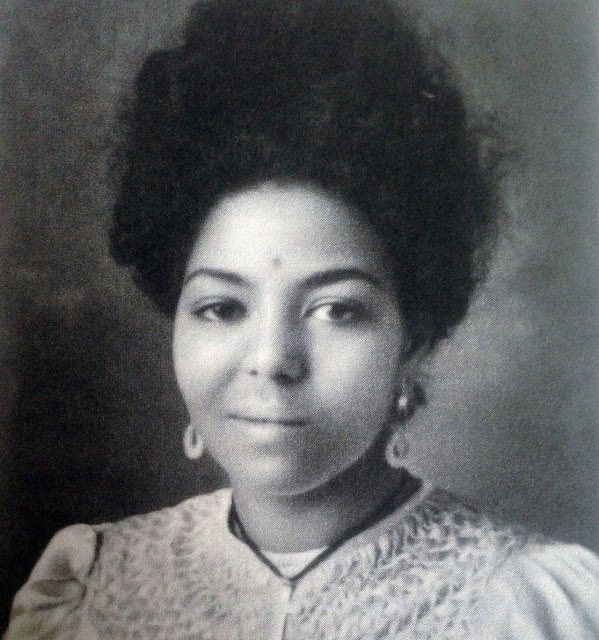 Her simple explanation was: “It was His willing.” When pressed for more details, she added: “We can choose how to respond.” 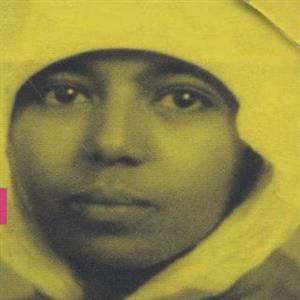 She must have felt the call of a religious life even in those days. But Guèbrou had to give up much more than just music to make that move. As a young woman, she attended fancy parties, drove a car, worked as a translator (she’s fluent in seven languages), and espoused a worldview that can only be described as feminist—she was the first woman to sing in an Ethiopian Orthodox Church and the first to work for the country’s civil service. She had dealings with all of the nation’s elites, all the way up to Emperor Haile Selassie, who allegedly helped her make her first record.

The earliest recordings of Guèbrou date back to 1963, but weren’t released until 1967, when she was approaching her mid-40s. By then she had already spent many years in the monastery, living barefoot in a hilltop retreat. Since the 1980s, she has resided at the Debre Genet monastery in Jerusalem—whose name literally translates as “Sanctuary of Paradise.” Here her music blends in with the chanting of monks and the other distinctive sounds of the neighborhood. 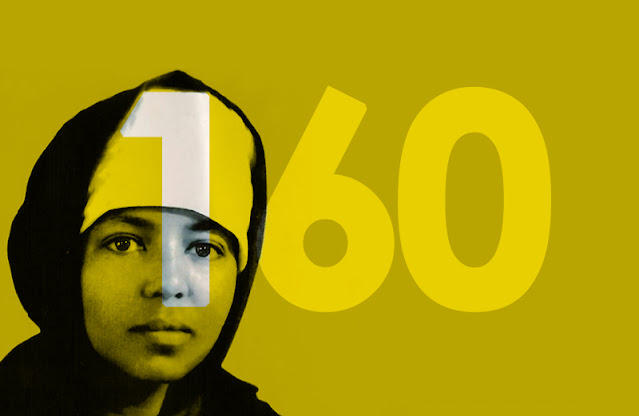 Perhaps that explains the most salient quality of her work. If I had to come up with a single word to describe it, I would call attention to its serenity. That’s a rarity in every genre, which despite their differences, almost always convey a sense of striving and forward motion. How many artists really capture a blissful attitude of peaceful centering in the act of creative expression? That’s the aspect that draws me again and again to the music of Emahoy Tsegué-Maryam Guèbrou. While others seem to be chasing after that elusive something that musicians always seek, she sounds like she’s already arrived.

Ted Gioia writes on music, books and popular culture.
He is author of 11 books, most recently Music: A Subversive History.

A video, Ornette Coleman at 89, here. 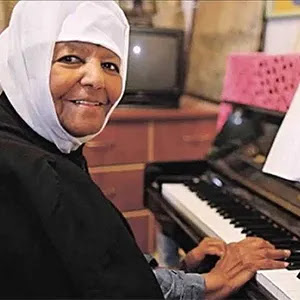 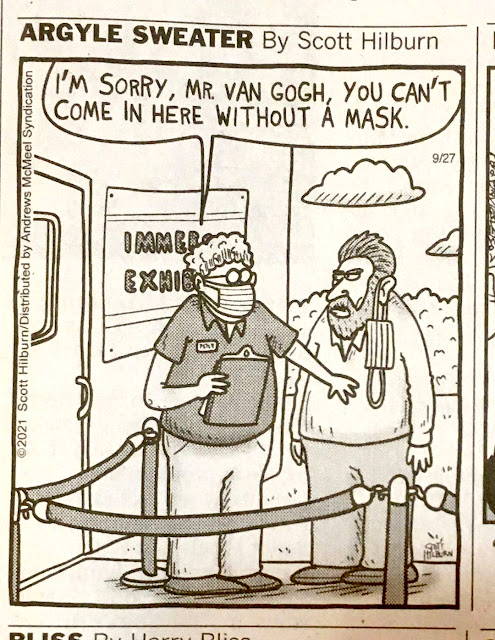 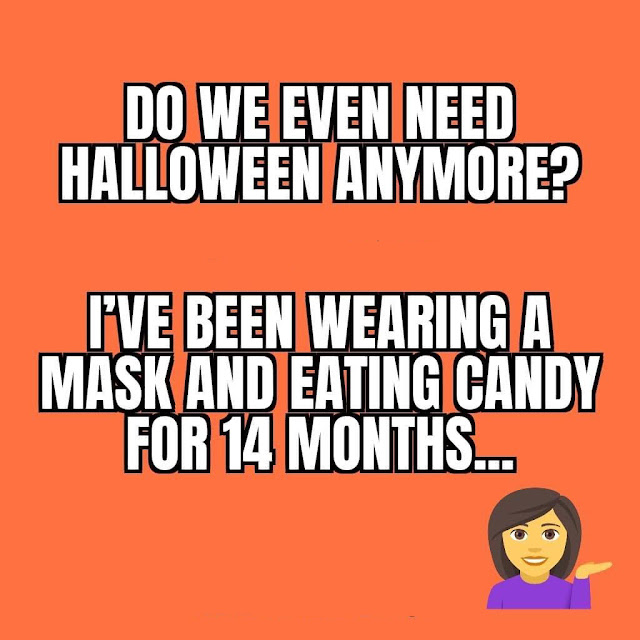 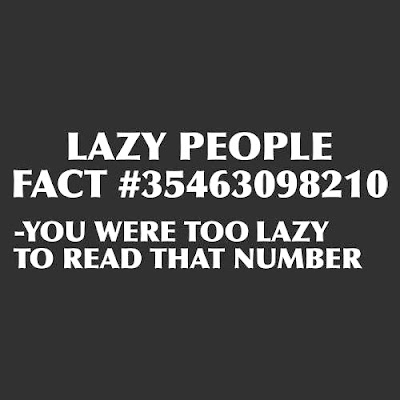 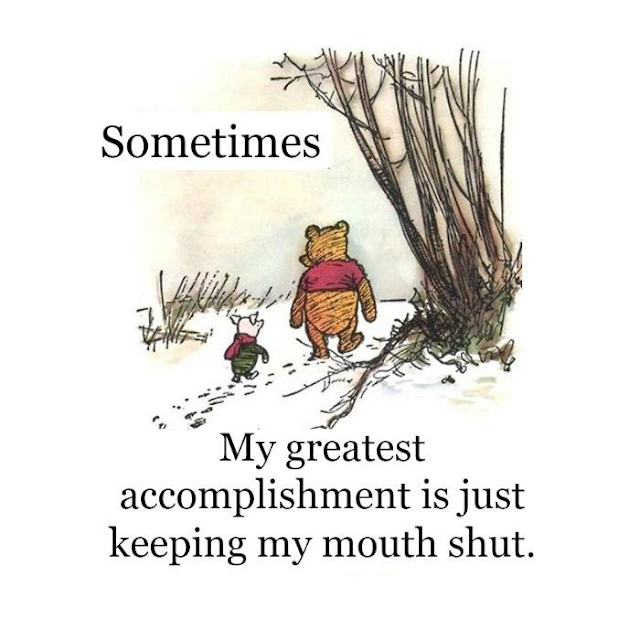 Click here for George Benson, Masquerade
then click back on this blog tab or here to listen as you browse, or not?

Wandering around the Albuquerque Airport Terminal, after learning my flight had been delayed four hours, I heard an announcement: “If anyone in the vicinity of Gate A-4 understands any Arabic, please come to the gate immediately.” Well — one pauses these days. Gate A-4 was my own gate.
I went there. An older woman in full traditional Palestinian embroidered dress, just like my grandma wore, was crumpled to the floor, wailing. “Help,” said the flight agent. “Talk to her. What is her problem? We told her the flight was going to be late and she did this.”
I stooped to put my arm around the woman and spoke haltingly. “Shu-dow-a, Shu-bid-uck Habibti? Stani schway, Min fadlick, Shu-bit-se-wee?” The minute she heard any words she knew, however poorly used, she stopped crying. She thought the flight had been cancelled entirely. She needed to be in El Paso for major medical treatment the next day.
I said, “No, we’re fine, you’ll get there, just later, who is picking you up? Let’s call him.”
We called her son, I spoke with him in English. I told him I would stay with his mother till we got on the plane and ride next to her. She talked to him. Then we called her other sons just
for the fun of it. Then we called my dad and he and she spoke for a while in Arabic and found out of course they had ten shared friends. Then I thought just for the heck of it why not call some Palestinian poets I know and let them chat with her? This all took up two hours. She was laughing a lot by then. Telling of her life, patting my knee, answering questions. She had pulled a sack of homemade mamool cookies — little powdered sugar crumbly mounds stuffed with dates and nuts — from her bag — and was offering them to all the women at the gate. To my amazement, not a single woman declined one. It was like a sacrament. The traveler from Argentina, the mom from California, the lovely woman from Laredo — we were all covered with the same powdered sugar. And smiling. There is no better cookie.
And then the airline broke out free apple juice from huge coolers and two little girls from our flight ran around serving it and they were covered with powdered sugar, too. And I noticed my new best friend — by now we were holding hands — had a potted plant poking out of her bag, some medicinal thing, with green furry leaves. Such an old country tradition. Always carry a plant. Always stay rooted to somewhere.
And I looked around that gate of late and weary ones and I thought, This is the world I want to live in. The shared world. Not a single person in that gate — once the crying of confusion stopped— seemed apprehensive about any other person. They took the cookies. I wanted to hug all those other women, too.
This can still happen anywhere. Not everything is lost.
~ Naomi Shihab Nye 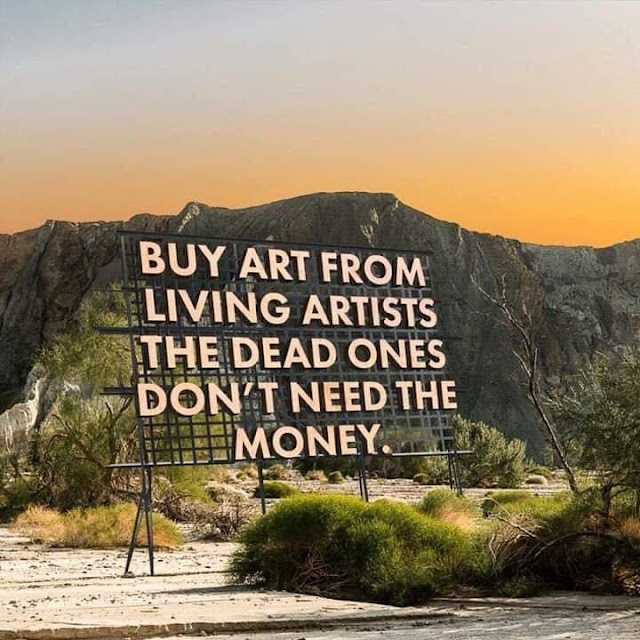 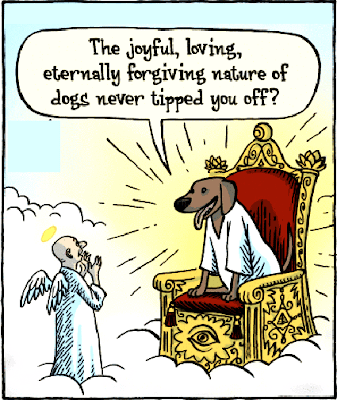 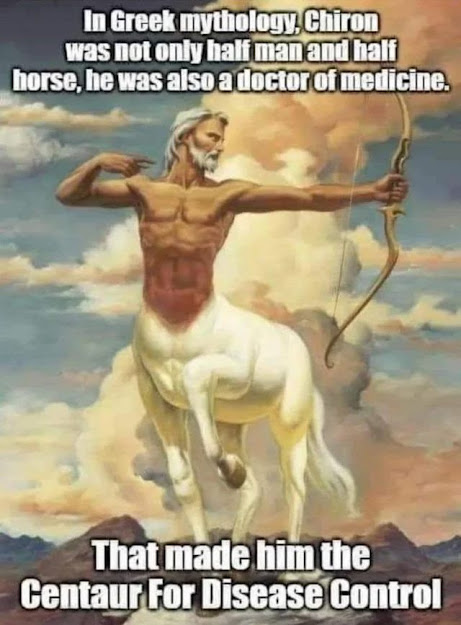 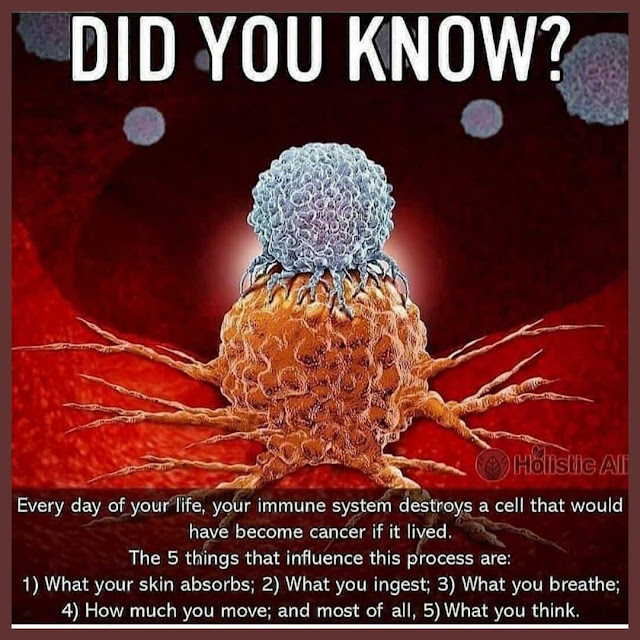 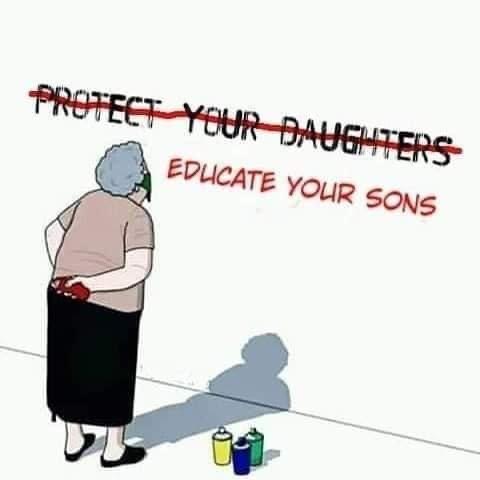 Click here for George Benson, Breezin'
then click back on this blog tab or here to listen as you browse, or not?

I am in bed only because I am hooked up to a ice machine (to minimize swelling)  which I usually wear in five hour  sessions around the clock, that feeds into a left shoulder wrap ... 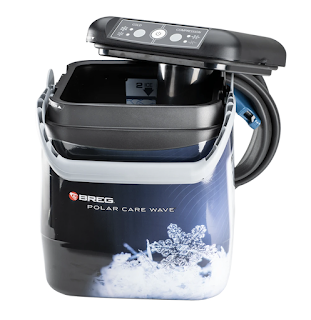 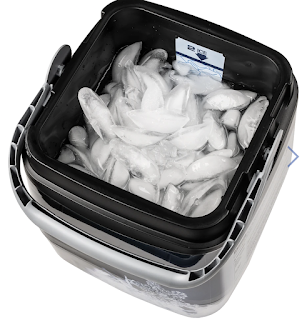 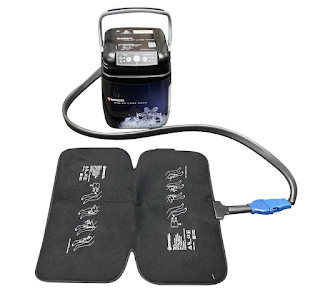 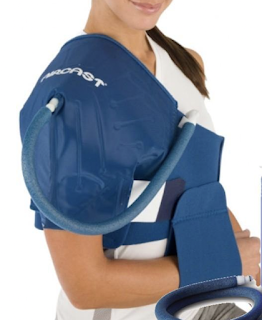 that is under my shoulder sling that keeps my shoulder and arm from moving. And, prevent turning in my sleep. 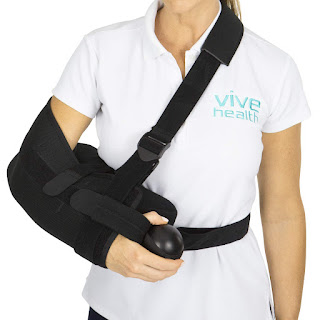 I am trying to type on my iPhone with one hand while the phone is propped up under my chin. Awkward! WW suggested using the dictation feature, oh yeah! And when I type one finger on my laptop, out of necessity I have to watch the keys, but quite often my lower palm has moved across keys that delete my efforts. 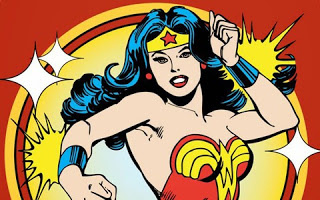 WW is so great, she comes each day, hooks up the ice machine, fixes food and helps me get a shower and shampoo, so that helps to get me more human. I can't drive for six weeks, so on November 4th, beware.
TMI? My blogs are usually based on what is going on in my life, so lately this has been the subject. I will try to find new topics soon, thanks for your kind patience. 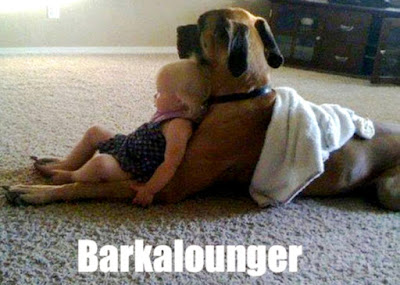 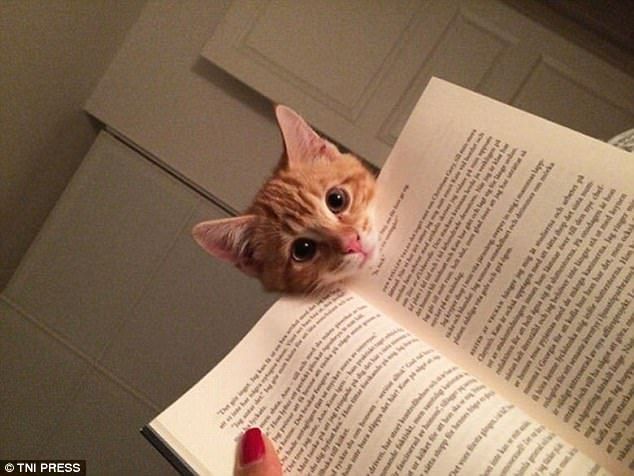 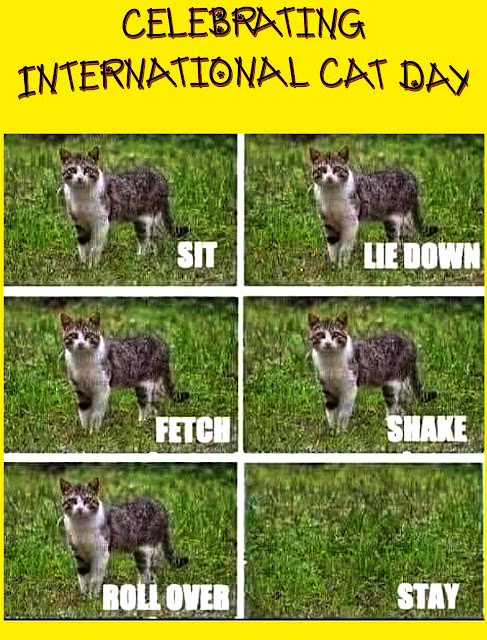 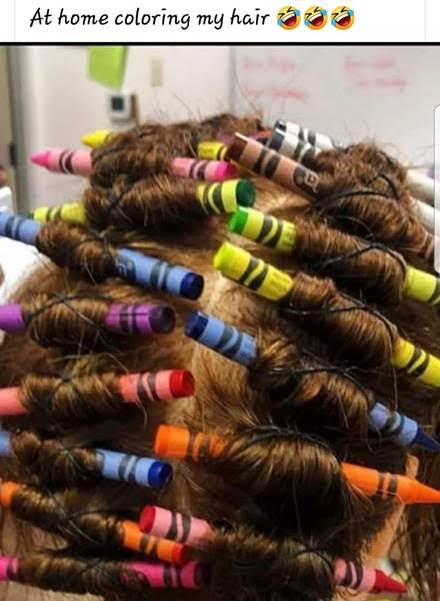 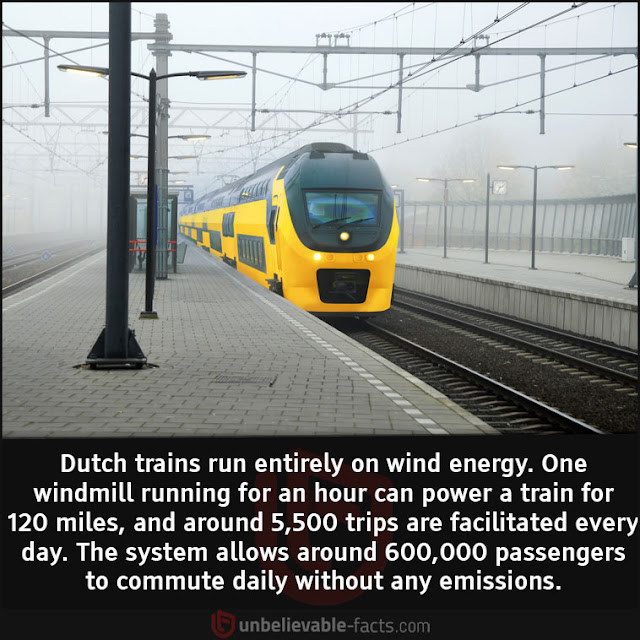